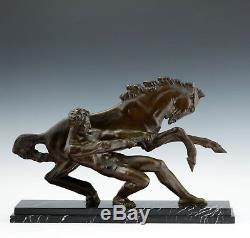 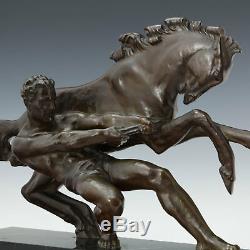 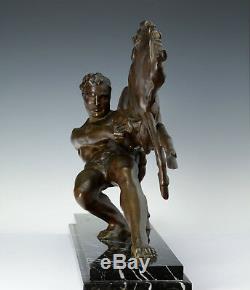 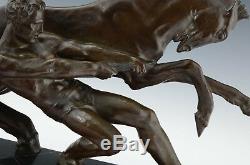 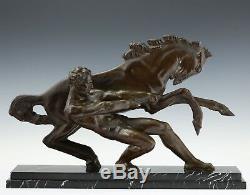 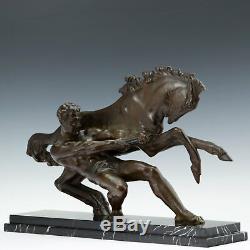 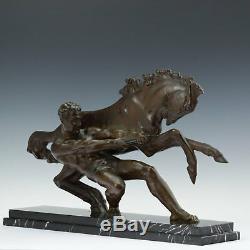 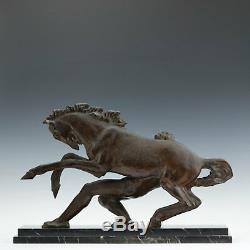 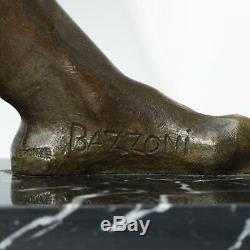 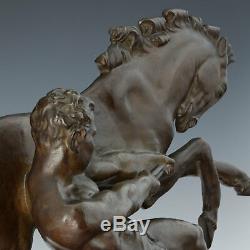 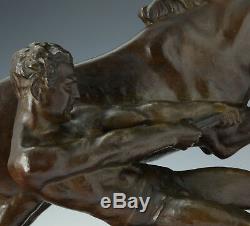 An extraordinary sculpture, where humans and animals almost as one unit combines power, speed and tremendous strength. In its purest form, the bronze medal with its dynamic elegance and design embodies the art deco elements. Managed the Italian bazzoni alberto imposing manner, to bring the opposing movements of horses and athletes in sensual form, absolutely convincing in their power strength and progressive. Running beautiful and rare bronze with brown patina and marble base layers. The minimum base chips and two light abplatzer on the left shows due to old age. Signed on the left foot with. Size: 60 cm x 15 cm x 39 cm 19.5 kg weight. Frequent academy of fine arts Parma and won a gold medal medal for the bust by alberto Rodani during his studies.

After the First World War he sinstalle in Parma and has regularly won awards in art exhibitions, including 1922 fumagalli sculpture award for the he war dead. In 1926 he sinstalle milan and assumes it public contracts, for example for the design of the new Milan Central Station. His wife bianca zirvi death in 1931, he opted for monumental you serious cimitero milan monument. Exhibitions at Palazzo della permanent follow in Milan, in 1934 he won the competition for the statue of justice; provided on the attic Milan courthouse in 1936, he conducts the autumn basrelif lucifer for justice plast in milan. The same year he sinstalle in Paris, where he exhibited fifty oeuvres in a solo exhibition in the gallery of carpenter in December.

Small bronzes are made to private collectors. With the outbreak of World War II, he returned to Milan, where he later years to 1973 on some in Paris (1945-1950) until his death. Power enormous speed and power of the United extraordinary sculpture, in which the man and the animal almost form a unit.

In its pure form, it embodies the element bronze, the elegance of the art deco style with dynamism and design. The sensual Italian form alberto bazzoni impressive succeeded by bringing the opposing movements of the horse and the athlete has, which is absolutely in its strength of energy and pushing.

Bronze beautiful patinated dark brown finish and went down to marble base. State very good and original. Because of his age, based displays minimum chips and two small chips in the left corner. The left has signed up.

Courses at the academy of fine arts in Parma and won a gold medal for the bust alberto Rodani during his studies. After World War he sinstalle to Parma and regularly wins awards at of exhibitions of art, including fumagalli price sculpture in 1922 for \In 1926 he sinstalle in Milan and took public orders, for example for the design of the new Milan Central Station. His wife bianca zirvi death in 1931, he put a memorial to the monumental cimitero in milan.

Follow exhibitions at the Palazzo della permanent in Milan in 1934, he won the competition for the statue of justice, including the laccrocheur be erected in the Milan courthouse; in 1936, he performed relif bottom of the fall of Lucifer for Milan courthouse. The same year he sinstalle in Paris, where he exhibited fifty works in a solo exhibition at the gallery in December carpenter. Smaller, which are produced for private collectors. With the outbreak of the second world was he returned to Milan, where he lived in Paris (1945-1950) until his death in 1973, with the exception of a few years. Jaime beautiful things and this is my greatest pleasure to find them, to draw them into their stories, to spend time with them and then set them free again.

Add to that a passionate interest in the exceptional and high crafted objects. You probably know the exciting feeling when you see or experience something special when the heart bouncing in excitement and joy inside it spreads. This is what I wanted in my life and this is how this shop was born.

The first stone of an acti study of history of literature and art as cultural communication. Curiosity, thirst for knowledge and a lot of collaboration with amazing personalities in the world of art and design are how I got where I am today. Antiques, history becomes tangible in the literal sense, one can perceive sensually. Calmly, they defy the constant change of fashion and lépoque button.

For me personally it is an inexhaustible source of inspiration. Some objects give up puzzles, senferment frankly, others reveal their past. They radiate joy of life, amaze or delight us; to the heart of a collector beat faster or become good friends and a significant part of your life.

They are large or controversial, but they are never boring. To me, the stories, the hands and the tradition behind the objects are just as important as their aesthetic qualities tic. Antiques can add so much value to your life, and I personally can not imagine a home without it each piece in my shop was thoughtful and personally selected. What unites them, this is their craftsmanship, care and thoroughness. The item \statues \The seller is \This article can be shipped worldwide.