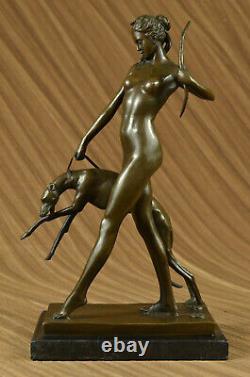 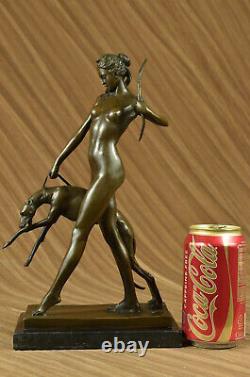 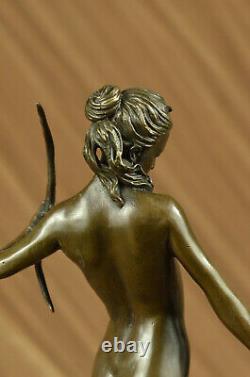 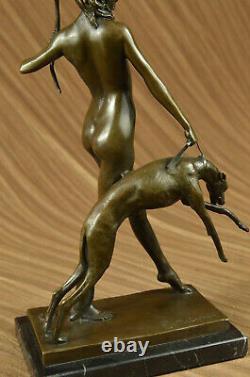 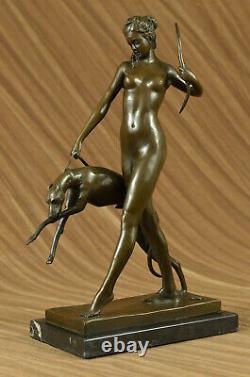 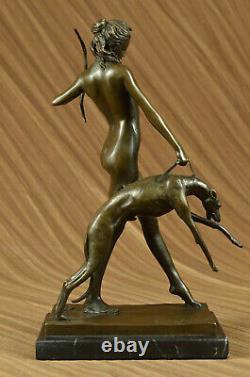 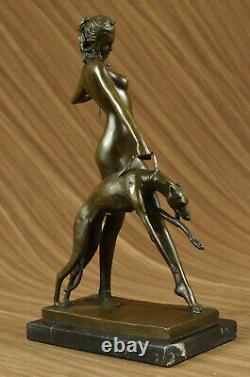 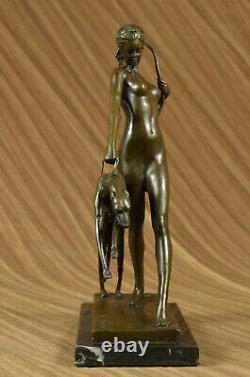 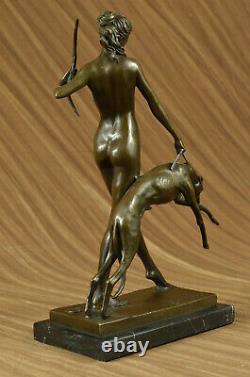 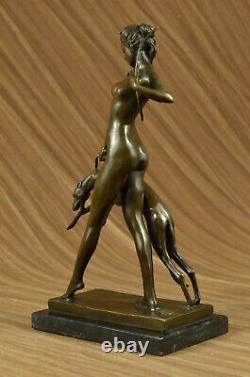 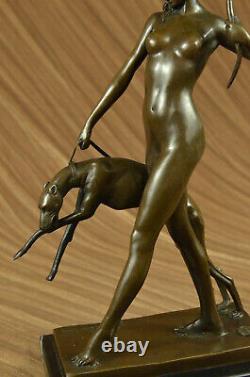 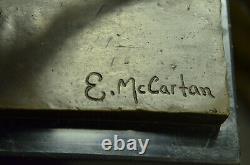 Statue sculpture diane huntress art deco style new bronze hot cast iron. This product sheet is originally written in English. Please find an automatic translation in French below. If you have any questions please contact us. Condition: The sculpture is in perfect condition. Bronze dimensions with marble base each: height 12 \"x width 9\".

Marble size: 7 \"x 4. Standing and naked, this bronze sculpture of \"Diane the Hunter\" was handmade and cast according to the \"lost wax method\". She poses with her small breasts exposed as she releases her bow.

You see the contours of her muscles and belly as she leans back while dropping her arrow. Standing on her toes, she stands in balance, bringing details to her legs as she looks straight ahead of her target. Her buttocks are tight and firm, her body is slender and natural. You see her muscles in her back and arms as she pulls her bow. Her hair is wavy but flows back into the wild winds of the forest.

At his feet, a big hunting dog. This sculpture was cast using the \"lost wax method\" and is mounted on a marble base. \"Diane the Hunter\" is derived from Italian and Greek myths. Most of the myths started in Italy but were quickly influenced by Greece.

It is difficult to find information about diana the hunter as she was also known as 'diana nemorensis' and 'artemis'. Below, a short myth about \"Diane the Hunter\".

Human sacrifices were offered to the native goddess. Diana's priest was an escaped slave. Each new priest had to kill his predecessors in order to get his office.

At Capoue, people believed that the preservation of the city depended on the fate of a long-lived deer dedicated to the goddess. Because of the influence of the Greek colonies in southern Italy around the pre-pacific life, Diane identified with the Greek goddess of woodlands acquiring the attributes of the latter.

For the Greeks, artemis was also the personification of the moon and its twin brother Apollo was associated with the sun. His father and mother were jupiter and latona. Diana believed that her virgin body was very sacred and not for a man's eyes. One day, the hunter, acteon, was walking around and came across diana bathing. Diana became so angry; she turned acteon into a deer.

Now he was unable to speak, and therefore no one would ever hear of the naked body of diana. Acteon was then killed by his own hunting dogs. This sculpture is signed by e. Most orders are shipped within 24 to 48 hours of purchase. Please contact us before making any purchases in these areas.

Please refer to the \"shipping and handling\" table for rates for each area. Condition: the sculpture is in perfect condition. Please contact us before making any purchases.

The item \"statue sculpture diane huntress art deco style new hot bronze cast iron\" has been on sale since Monday, December 21, 2020. It is in the category \"art, antiques-art of the xxe, contemporary-sculptures, statues\". The seller is \"bronze_vault\" and is located in westbury, New York. This item can be delivered anywhere in the world.