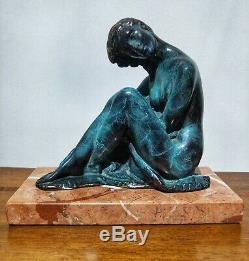 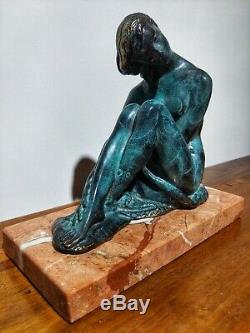 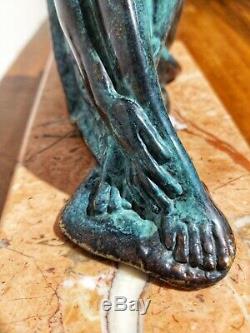 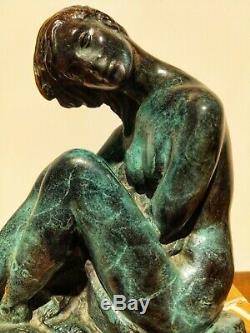 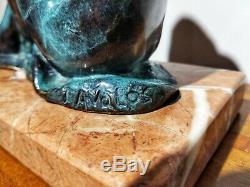 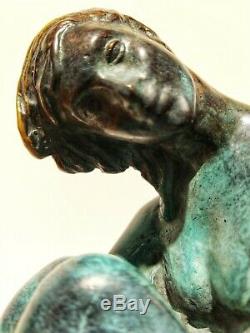 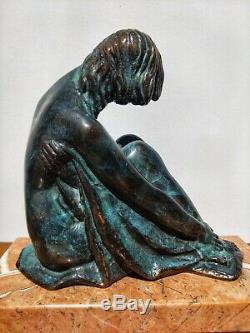 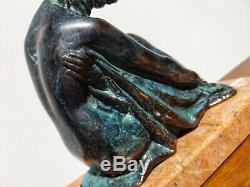 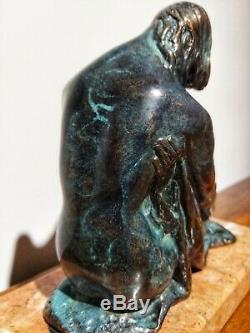 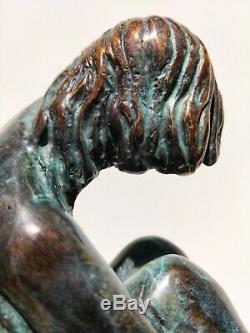 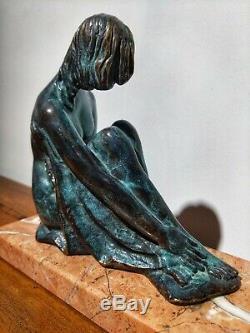 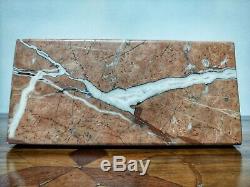 We present this art deco bronze sculpture with a marble base of the 20th century signed avalos juan taborda there. The rectangular base is a beautiful red marble of Alicante of Spain, red brick with clear veins of white, and gray. The bronze sculpture in a beautiful patina green light and dark aqua, representing a naked girl. The young woman is sitting with her legs together, his right hand stroking his feet and left arm under his chest bears the sheet in the back that reclines beneath her.

The neck is lowered and faces the observer, the hair falls behind the model revealing a graceful look that hinted at a smile. The beautiful aqua green patina with light-dark bronze games that seems almost stone, transmitting elegance and beauty, soft as the skin of a woman. The skill of the Spanish sculptor is also noted in the physiognomy of the body: legs, arms, hands, feet and back convey the beauty and eroticism. A work of the most important Spanish sculpture of the twentieth century with a radiant marble base.

For more photos and information: please contact me. Shipping worldwide in a wooden crate chipboard (free of customs restrictions) via Fed Ex or private courier (depending on the size of the object and its fragility), if your destination does not appear in the rates, contact us or write us.

Pay pal: if money is withheld, the article will not be shipped. Payment by bank transfer: 1/3 at the time of confirmation of the order to start packing and shipping procedures. The remaining 2/3 of the total for the shipping of the item. The item will not be shipped unless it is paid. Visit our profiles on social networks to read customer reviews and see our packaging.

Juan de Ávalos taborda y (mérida, October 21, 1911 - Madrid, July 6, 2006) was a Spanish sculptor. His career has been associated with sculptures of the valle de los caídos, considered the most important Spanish sculptor of the twentieth century. He began to show a talent for drawing at the age of six, receiving lessons in drawing Juan Carmona, parish priest of the church of santa eulalia. At the age of eight, the family moved to Madrid.

He studied at the Collegio dei mercedarios, while he went to the school of arts and crafts. As a child he loved classical sculpture, making sketches in Retiro Cason del Buen (then home to the national museum of art reproductions), and don juan tenorio josé zorrilla, for which he made several sketches. Although his family wants him to go to college, he began as an apprentice for various wood carvers and, at the age of fourteen, he entered the Real Academia de Bellas Artes de San Fernando. In 1933, at age 22, he won a place at the University of Seville, highlighting the theater merida. He met miguel de unamuno at the first of médée. A year later, he was appointed deputy director of the Archaeological Museum in mérida. In 1936, he enlisted in the army, but in 1938, he fell seriously wounded in Jaén. The same year, he married Soledad carballo nuñez in Pontevedra and had two children: Juan and Luis.

San giovanni in the Valle de los caídos. After the war, he opened a studio in Madrid, but in 1940 he received a complaint because he considers himself a Republican colleague. Ávalos has continued its normal activity by participating in the National Exhibition of Fine Arts. In 1945, he received a public tribute to the City of Port room, which was followed by several commissions in Lisbon, so he decided to set up his workshop.

He will participate in exhibitions in buenos aires and Rio de Janeiro. In 1950, a friend recommended to achieve the sculptures of the competition of the basilica of santa cruz della valle de los caídos. Despite what has been traditionally said links never existed between the sculptor and Francisco Franco. During the Expo 1950, the caudillo, visiting the exhibition, stopped in front of the statue of Ávalos said: this is the great sculptor who need spain. They met at the Royal Palace of El Pardo, on the advice of blas pérez gonzález, interior minister.

There the sculptor proposed a fundamentally religious theme, avoiding any suggestion. About aesthetics, it was written that it is eruel, or in christs and parts of the chisel. In 1976, coinciding with the bicentenary of the independence of the United States, spain has given this country an equestrian statue of Galvez, the work of Juan de Avalos, who was placed on Virginia Avenue in washington, washington dc . The statue is located in Memorial Park bernardo of Galvez, near the aforementioned Avenue.

In Benidorm (Alicante), you can see the monument to the fallen sailors and in the church of Mondragón has Cristo. At Burgos are kept equestrian statue of the count Diego Porcelos (founder of the city) and the monument to the armed forces. The city of úbeda exposes two lions on the place of vázquez Molina before the Sanssouci Palace. In the Madrid Cathedral, a lying Christ is guarded because of his hand. The item \statues \The seller is \This article can be shipped worldwide.